How to Prepare for Winter: Prepping for the Cold Season

Winter is just around the corner, and while it is a distracting season with preparations for Christmas holidays and that well-earnt vacation time within reach, there is also a checklist of things you should be doing to prepare for winter to make sure you stay safe in this snow-covered season.

Preparing for winter is just as important as preparing for a storm season, as for most places, the cold brings different types of dangers that we don’t usually prepare for such as snow, ice and fire hazards in the home.

So while you’re thinking of what to plan with family and friends for the season’s holiday, use this list to check off on some important preparations that need to be done in and around the home.

How you can prepare for winter in 10 easy ways

1. Check for any gaps around windows and door frames

If any of the gaps can fit a credit card, you’re going to lose a tremendous amount of heat taking lumps of money through power bills or your stored up solar heating. Use silicone caulk (sealant) on the outside of the windows and door frames to fill any gaps. Most of the caulk fillers available are quite cheap and one should do the trick.

Make sure you get an all-weather caulk so that you don’t have to use it next season.

2. Switching the fans on reverse

If you have ceiling fans with a reverse switch, use it. Ceiling fans are shaped so that if they run in a clockwise direction, they will push the heat down in the room instead of allowing it to naturally rise.

This is a great approach for homes with high ceilings to keep the warmth down around the people rather than rising up into the ceiling.

3. Bring garden hoses and sprinklers inside and remove any water out of them

Leaving hoses and sprinklers outside can cause them damage, especially if they still have water in them. Allowing the water to freeze in a hose outside can cause it to expand and spring leaks, the same thing can happen to the taps and faucets if you leave the hose connected to the home systems. Remove all of the hoses and bring them into your garage, drain the water out of them as well.

Make sure you also turn off any outdoor faucets tightly as undrained water pipes will freeze as well causing the same expansion problems.

One of the best bits of advice I had from an old farmer was to use a fuel stabilizer in any motors that I didn’t use for a while. The STA-BIL stabilizer is cheap and keeps the fuel in your boat, mower and tractor engines from expiring and going thick when you don’t use them for some time so that when winter is over, the engines will not clog up from gooey expired fuel. This is also a way to store fuel for up to 12 months.

Just before winter, I always add a dash of this to the lawnmower to keep it fresh for the next season.

Also, don’t forget to get some easy clip snow chains if you are driving through slippery regional roads.

5. Clean the garage so you can park your vehicles in it

Nothing is worse than having mass amounts of snow lumped on your car. It is also much better for any other vehicles, such as the lawnmower, to be sitting in a garage than outdoors in winter. So when you have time, move some of those things around so you can bring the car in.

6. Prepare your heaters to fight the cold

One of the biggest things for heaters, or more specifically fireplace chimneys, is to make sure they are clean to avoid chimney fires. Chimney fires happen when there is a build-up of a highly-combustible residue caused from fireplaces that stick to the inside walls of the chimney. This can cause severe structural damage to the chimney and the rest of the building as it catches on fire in its explosive manner.

You can get a professional cleaning by contacting any local qualified chimney evaluators and cleaners.

Also change the filter in your furnace, this is generally an annual thing just to make sure it operates in a clean and effective manner.

Try to get a personal backup heater as they are great to heat up a bathroom for when the family uses the shower in the evening or the morning before work and school, or to heat up a separate bedroom. The Mr. Heater is a great brand to use in that manner as it is one of the safest possible heaters you can buy.

7. Get the right winter tools to deal with ice and snow

Get a snow shovel. Snow shovels try something wide that handle a large volume of snow and can scrape against the ground like any snow pusher should. You can add a silicon spray with these and they work quite well. Make sure you have the right clothes to be working with the snow.

When you’re scraping the ice, you’ll also want to keep some salt handy to throw on the road, footpath and around the house which helps with the defrost of the ice.

8. Use a snow thrower

These electric snow thrower shovels are relatively new on the market but make life a lot easier.

Sure, you can buy much more expensive snow throwers than this, but they do a perfect job for what they do, which is essentially mowing the snow. These are really good to use if you have thick layers of snow you want to get rid of without the endless back-breaking work of shoveling.

Winter is the peak period for indoor fire-related issues just because the amount of heaters and fires the are blaring to keep us warm, so it is wise to make sure all of your fire extinguishers are checked to see if they are in date and make sure your family knows some simple fire emergency tips as well as how to use the fire extinguishers.

To use a fire extinguisher correctly, remember the PASS system, which stands for:

10. Get a winter survival kit for your car

You can make your own winter survival kit, but because of the season we are coming into, you might need to carry a few items you wouldn’t usually carry.

And the last thing, enjoy this time of year. If you have kids, show them what a good snowball looks like, and don’t forget to be one yourself. 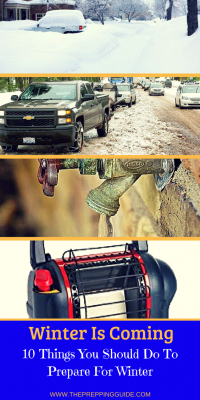 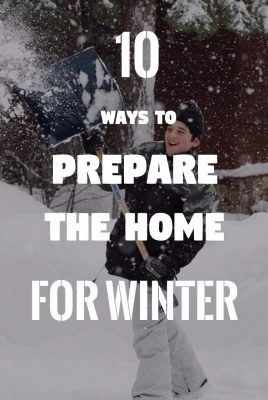 1 thought on “How to Prepare for Winter: Prepping for the Cold Season”