No Power? Charge Your Phone with a 9-Volt Battery

Stuck in a blackout and need to charge your cell phone?

Time to get creative.

A 9-volt battery can give your phone enough juice to make an important call or text.

In modern society, our phones are not just a commodity, they’re a necessity.

When an emergency occurs, we want the ability to call for help or contact our loved ones.

We take electricity for granted, thinking that it’s always going to be there.

But what happens if you’re without power and need to make an important call but your phone is dead?

Batteries serve many purposes. They are portable, convenient, earth-friendly, and can provide better performance than many alternative power sources. They also store energy fairly well and for a long time.

Batteries and How They Work

If you don’t already have batteries in your bug-out bag, it’s time to stock up. However, to be able to effectively use a battery to charge your cell phone, you need to understand how they work.

Electricity is the flow of electrons through a conductive path, such as a wire. This pathway is referred to as a circuit. The electrical circuit is connected to the cathode (+) and the anode (-) of a battery. In the center of the battery is another component known as the electrolyte.

As chemical reactions within the battery occur, electrons build up in the anode. This creates an electrical change between the anode and the cathode. To remedy this change, the electrons repel against one another to find a space with fewer electrons. This forces the electrons towards the cathode, but the electrolyte prevents direct access from the anode to the cathode.

When the circuit is closed, such as by connecting a wire from the anode to the cathode, the electrons are able to reach the cathode. The electrons pass through the wire, powering anything in its path, such as a light bulb or a cell phone.

Unfortunately, the power supplied by a battery is short-lived. As the electro-chemical processes cause changes within the anode and cathode, they are only able to supply a limited amount of power.

Recharging a battery is possible as it changes the direction of the flow of electrons using an alternative power source, such as solar panels. When these electro-chemical processes occur in reverse, power is restored to the anode and cathode.

How to Charge Your Phone with a Battery

Cell phones use lithium ion batteries to operate. These batteries are rechargeable and require a charging cord to restore the battery’s power after it has been drained. On standby, a cell phone will last an average of three days before it will need to be recharged, according to Techwalla. However, the type of phone, age of the phone, applications running, and similar factors can greatly affect battery life.

If your cell phone is low on power or completely drained and you are without electricity, a 9-volt battery can provide just enough juice to make a few important calls. To make this work, you will need some basic supplies, including a 9-volt battery, a metal spring from a pen, and a car charger (the type that plugs into your car’s cigarette lighter).

To charge your cell phone with a 9-volt battery, follow these instructions. 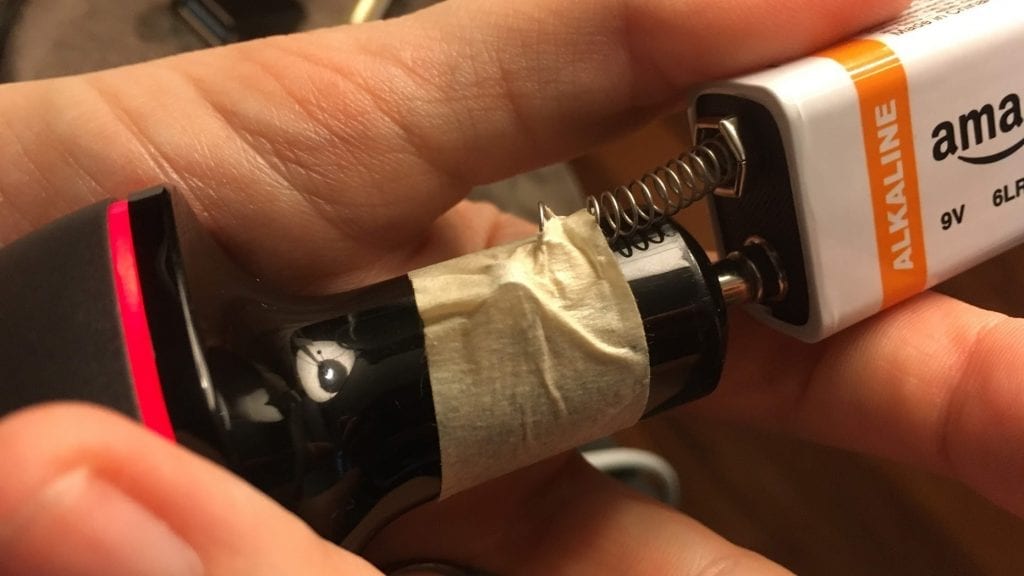 How fast your cell phone charges can greatly range depending on the type of phone you have, how charged your phone is, and how much juice is left in the 9-volt battery. However, on average you can expect to charge your phone by about 10 percent within 10 to 30 minutes.

If you get tired of holding the phone in place, you can use tape to hold the different components together.

You may be wondering if charging your cell phone with a 9-volt battery is safe for your device. The short answer is yes.

By using a car charger to power your device, you can count on the charger to regulate how much current is flowing to your phone. However, that does not mean that you should use this method of charging your phone when you have other options.

Using a 9-volt battery regularly to charge your phone could shorten the battery life of your device.

You also risk injuring yourself if the battery experiences a short, resulting in an explosion. Only use a 9-volt battery to charge your phone in an emergency and when no other power source is available.

Once you have your cell phone powered up, you want to extend the life of the battery for as long as possible. There are a number of tips and tricks that help reduce stress on the battery and extend its natural lifespan.

Charging Your Phone with a Battery

When faced with an emergency that requires you to make an important phone call, having a cell phone available can be invaluable.

Unfortunately, a lack of electricity can make it difficult, but not impossible, to charge your phone.

If you have a few standard batteries lying around, you may be able to give your phone enough juice to make that crucial call.

A DIY portable phone charger is the ultimate tool for any prepper who wants to be prepared for the unknown. To ensure that you know what you’re doing if a situation ever arises, try practicing this method at home.

How to Make Homemade Pepper Spray: A Step-by-Step Guide

10 Reasons Preppers Should Have Chickens