5 Things You Need To Know To Conduct A Room Clearance

This is especially the case when we consider the importance of military tactics in a SHTF scenario. In the event you need to search a building and you suspect there may be hostile enemies present, you want to be sure you know how to conduct effective room clearance drills so that you and your team can operate with safety and precision.

In this post, we take a look at how you can clear rooms so that should you be in any urban gunfight or hostile situation, you can sweep the place to clear out any potential enemies.

We’ve all seen those movies like John Wick and Act of Valor that have piqued the interest of the common person into the types of tactics that are used by professionals to enter a room filled with bad guys and eliminate them.  Though the movies make this proposition seem as simple as breathing, modern-day warfighters spend hours training good tactics, precision shooting, and communication skills for when the balloon goes up and they must hold the lives of their teammates in their hands.

1. One person can not clear a house by himself – This idea pushed by Hollywood films does not stand up to the scrutiny of experience.  A typical room clearance team is 4 men. The house has more than one story you will need more men. Likewise, if you are clearing an industrial building you will need even more men.

2.You can not clear a house without the chance getting wounded – The Battle of Ramadi was some of the most intense door to door fighting since the Vietnam War.  The Marines who fought in this battle had a 90% likelihood of being wounded if they were the first men through the door.  The bottom line of the situation is if a bad guy knows you are coming, the first guy through the door is going to catch a round or two.  The hope is that the body armor will be enough to save your life.  Obviously, this is not always the case.

In spite of these two Hollywood fallacies room clearances is still a valuable skill to know and to practice with your fellow security-minded friends. Against an untrained and unaware adversary, these techniques are difficult to stand against.

1. Slow is Smooth, Smooth is Fast

This is fundamental that too many untrained and unprepared people forget and it leads to critical seconds being lost.  When a magazine change or a well-aimed shot could be the difference between life and death rushing and fumbling the ball helps no one.

We have all seen the groups of twelve-year-old Asians in the park doing Thai Chi, and how they seem to flow from posture to posture never rushing but never stopping.  This is the goal while you are doing a room clearance – to flow like water into the room.  When you see a truly well-trained team working together in unison there is no other word to describe it but, SEXY.  It is even better when you are a part of the team. So, as the fortune cookie says, “slow down in order to speed up.”

2. Get out of the Doorway

In the trade, the area through the doorway is called the fatal funnel.  All of your enemy’s fire is going to be funneling through the door as soon as it opens.  This is why the first guy through the door often gets hit.  He actually uses his body as a shield to allow his buddies behind him to get into the room. In fact, in most occupations where these skills are taught, the term “body armor” does not mean the protective vest but rather standing next to your buddy and giving him extra protection. In order for a round to hit him it would have to pass through your front protective plate, you, and you back protective plate before it does.  Unless the adversaries are using .50 cal weapons you should be ok.

3.The first guy is always right

When entering a room, whichever way the first guy goes, the second goes the opposite way.  It doesn’t matter if there was an agreed upon order and the first guy forgets it.  You have to be flexible and take the job that is available.

This seems fairly self-explanatory but many first timers get too caught up with the plan and cannot adjust to the introduction of a variable.

Knowing one’s Limit Of Advance (LOA) is imperative to not being shot by your own guys while entering a room.  Room clearing tactics give very clear instructions as to where everyone goes and where everyone is supposed to cover.

If you go further than your LOA, it is likely you will cross into one of your buddies’ line of sight and could cause a friendly fire incident.  This would be embarrassing for you and devastating for your friend.  No one wants to go through life knowing they killed their friend on accident.

This falls under the “if you see something say something” rule. If you can’t see behind a desk in the room, tell your friends. Don’t try to use crazy tactical lingo. Just say what the issue is.  Discuss what the best course of action is and execute it. A very important point to this is while you are discussing what to do you must keep your weapons pointed at the danger area.  Do not look at your friends while deciding you can talk without looking at each other and you should do that with this.

While all of these rules are good to know they do not give you any true idea of how to do a room clearance.  The following diagrams and images will help give you a better idea of what basic tactics looks like. 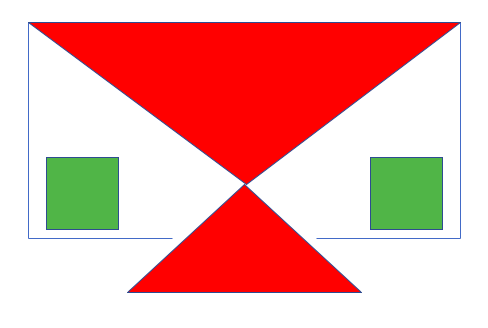 Above we have a very basic look at a room with a center feed doorway at the bottom and the Fatal Funnel highlighted in red.  The goal of the first and second guy is to get from their positions outside the room to the safe green areas as quickly as possible.  While making this short journey the first two must clear the extreme corners and sweep around to the opposite walls as shown below. 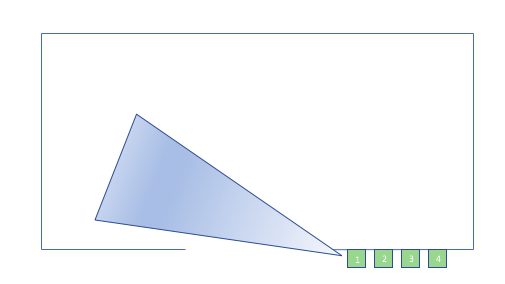 Here we have a four-man team in their staring positions, also known as the “stack,” getting ready to enter the room.  They are out of the Fatal Funnel and waiting to make sure everyone is ready.  When the forth man gives the signal up the chain, everyone enters in a constant flow. 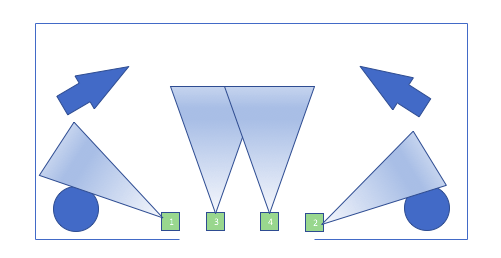 After man 1&2 enter and clear their respective corners they will walk to the areas the just cleared while sweeping their aim and gaze around the room ensuring there are no threats as they go. The 3&4 man also enter with their rifles pointed forward and then sidestep following the 1&2 man out of the Fatal Funnel.

All four men should be in the room in just over a second. By following rule number one they are able to flow into the room keeping their weapons and their aim steady should they need to employ either. 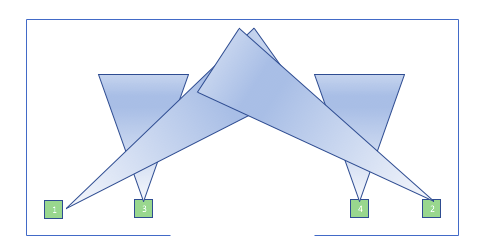 The importance of the rules of room clearing cannot be overstated. Regardless of tactical methodology, these rules remain the same.  This example has shown and described the method in which one would clear a single room with no obstacles in the room.

Safe weapon handling is a must

The final subject that must be brought up when discussing a room clearance is weapon handling.  The weapons safety rules must be followed at all times. These rules are as follows:

The first rule is ubiquitous to all weapons handling and does not need any extrapolation.  Rules 2-5, however, are of vital importance to those who wish to not kill their buddies.  From the stack, through to the final all clear there should never be a weapon pointed at your buddies. This is imperative while room clearing. In a high stress and fast pace scenario such as a close quarter fight pointing your weapon at a buddy increases the potential for friendly fire tenfold.

If you are going into a room that may contain potential threats you must not have your weapon on safe.  It does not increase safety in any way that isn’t already covered by keeping your finger off the trigger.

Know the difference between friend and foe

The final rule of knowing your target has the most nuance to it.  Before you even consider clearing a room you and your team must do shoot/no shoot drills.  Knowing the difference between a threat and a potential victim is the hardest thing to know when assessing a situation.  The wrong decision could get you arrested, or worse, killed.

Also, seeing any hidden threats is a skill only attained by practice.  Knowing what lies beyond and in-between you and your target is another point which requires some exposition.

But, in order to examine it, we must look at the study of ballistics. All bullets can be broken up into two very basic categories.  Full metal jacket and hollow point.  Full metal jacketed rounds can be very dangerous in a room clearance.  An FMJ round is a lead core surrounded by a bonded copper jacket.  This hardened exterior allows the round to have extreme penetration abilities.  For example, a standard 5.56 Nato round has the ability to go through multiple walls and people before running out of steam.  This is not a quality you want in a round while room clearing because you never know what or who is on the other side of that wall.

The hollow point is a much better option for the amateur warrior.  Instead of a full copper jacket, the hollow point does not have any copper on its tip and a slight depression in the tip.  This causes the round to expand rapidly upon impact.  This transfers the greatest amount of energy to the target and prevents over penetration.  This gives the benefit of significantly decreasing the likelihood of hitting innocent people in the next room…. or the room after that.

All this information does no one any good if you do not practice.  The basic Marine infantryman gets close to 50 hours of training before even getting out of basic infantry school.  Training with a team and switching roles is the only true way to get used to entering a room and automating the reflexes necessary to complete these techniques with anything close to reliability.

Stay frosty and watch your six. 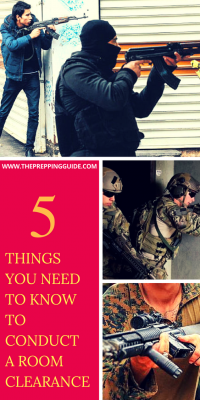 7 Things to Look for in a Rifle Scope Revealed