The Swedish Are Prepared With This Government War Prepping Guide

If you ever thought we could be close to a world war, well we just stepped a lot closer. The Swedish Government has told its 9.9 million residents how to prepare for war, terrorism, and every other doomsday event and what to do when it happens. That’s right, the Swedish are prepping.

In a step to prepare its citizens for war, the Swedish Government circulated a 20-page survival pamphlet detailing the procedures people should undertake if war breaks out, as well as how to prepare for war. The survival pamphlets, called ‘Om krisen eller kriget kommer’, (If Crisis Or War Comes) were delivered to households in Sweden this week.

These survival guides are a concern for many, as it is the first time in more than half a century that a government has made a public announcement campaign on what to do if there is a war. But the leaflets don’t just stop there, they cover a lot of other information that we have written about on The Prepping Guide, such as preparing the population for cyber attacks, terror attacks, climate change, attempts to influence decision-makers, severed transport lines causing a food shortage, and all-out urban warfare.

Preparedness is also a big factor of the public announcement’s content, as it explains to people how they can source food, water, heat, work together in preparedness communities, where to find Sweden’s nearest bomb shelters and how to fight back in a war.

Why has Sweden sent out this survival guide for war?

There is no doubt that there is a lot of political tension in the world at the moment. But why is the Swedish government leading the way in preparing its citizens for possible war? The Government itself has been increasing its military spending budget from 2016. Pre-2016, Sweden’s defense budget was dropping due to safety and no imminent threats in the area.

This booklet gives no indication as to where are the threat may come from, but we do know that Sweden and other European countries close to Russian borders have been on high alert since Russia’s persistent involvement in Ukraine. There have also been repeated violations of Sweden’s airspace by Russsian fighter pilots and when Sweden made warnings they were ignored entirely by Russian ears.

In the past few months, we have also seen public announcements on preparations for war from the Russian side too. Just recently, we heard that Russia’s State-owned TV news broadcaster was announcing how to prepare for nuclear war. It was covering the ideal survival kit, gas masks and how to remain free of contamination.

What is in the Swedish war survival guide?

The Swedish survival guide is broken down into three distinct parts:

In each of those parts, there are a number of important subsections, tips, and lists for survival in a modern-day war environment. The most interesting part of the survival guide, especially for preppers, is its encouragement of real preparedness. The pamphlet poses the question: “What would you do if your everyday life was turned upside down?” and lists a number of reasons that may happen, such as flooding, forest fires, shortages of food, disruptions to IT systems and the grid failing to work.

Terror attacks – The pamphlet also covers what to do in the event of a terror attack, which is an issue in European countries as urban terrorism cases have escalated heavily in the past five years. According to the pamphlet, the Swedish Government recommends steps such as moving to a safe place, calling the police, warn others, do not call anyone on the phone unless you have to and to not share unconfirmed information with anyone.

Sweden’s ‘Total Defence’ – Interestingly enough, the Swedish Government wants its residents to contribute to Sweden’s ‘total defense’ plan, which means that every person between the age of 16 and 70-years-old can be called up to assist in the event of a war. This total defense plan would see citizens thrown into either military conscription, civil conscription, or general national service.

What you need to survive a war – This new war survival guide from the Swedish Government also covers a checklist of items and encourages citizens to “share certain things and borrow from one another” in a type of post-collapse trade environment. The items they recommend are broken down into five sections: food, water, warmth, communications, and ‘other’. There is definitely no mention of any weapons or knives in the list.

Sweden’s prepper army – At the end of the guide is the Government’s urge for its citizens to ‘Get Involved’ in preparedness. It says that many “non-profit organizations and faith communities make important contributions to our collective security and preparedness”. As preppers, one of our important methods of preparedness is to have a community or team to work with. The Amish have existed in this style of homesteading off-grid community and has proven how sustainable it can be without dependence on outside influences.

If you would like to read the pamphlet yourself, we have included the full English version below. 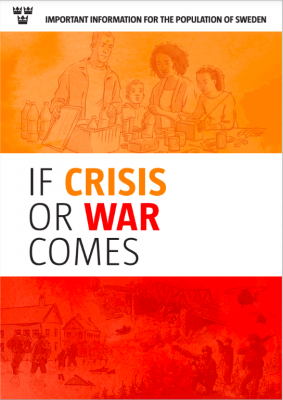 What do you think about the new Swedish survival guide?

For one, I am very happy that a government has taken the initiative to promote personal, at-home, preparedness for the big issues such as war, grid-down events, and terrorism, as well as natural disasters, hackers and food supply shortages. What’s even better is that the Swedish Government is promoting the idea of joining groups dedicated towards preparedness and sharing of survival and preparedness strategies.

I am interested to hear what you think, let me know in the comments section below.

Is the Purge Real in America? Here’s How it Could Happen