OC spray is one of the world’s most trusted forms of self-defense and for a good reason, it works. It is relied upon by law enforcement, military and outdoors enthusiasts and why not? It is cheap, brutally effective (I have used it before) and compact to carry with you every day in your car, handbag or backpack.

There are a lot of different types of OC spray out there with quite a few different names such as capsicum spray, pepper spray, capsaicin spray, CS spray and pepper gel.

Where it is used

A big part of why OC spray is so popular is due to its diverse and non-lethal use. If you were originally thinking it was only available and used by police and military members, you are definitely wrong. Some of the biggest uses of OC spray are:

What OC Spray is

Put simply, OC spray is oleoresin capsicum. It is an extract from peppers where a method of finely grounding the pepper and then extracting the concentrate of that using evaporation. To say it easier, you know when you eat a chilli and you can feel the burning feeling around your lips? That is a very diluted form of what is used in OC spray, so you can imagine how powerful the spray can be. 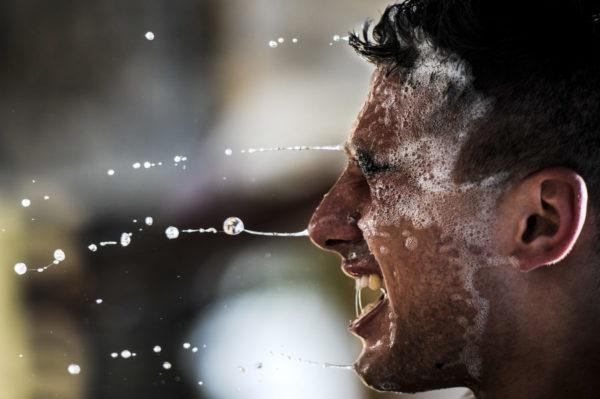 You might, however, see that some sprays are measured in a different way. This is due to different national regulations which stipulate an OC spray must have an OC limitation. The simple difference is:

So for law enforcement, we can say the strength of their ‘burning stuff’ is between 1.3 and 2% but the amount of it would be much higher.

Ever had chilli in your eyes? It’s horrible and it burns. Even just thinking about it will bring tears to your eyes. So imagine that multiplied by one hundred – it is that intense. I have used it before as part of law enforcement and it is a wild burn, disabling me from doing anything apart from trying to see, let alone falling to the ground in pain.

OC spray has some very strong effects, which are temporary but very effective. The blindness sensation lasts for about 10-15 minutes depending on the strength of the spray. But there is also the excruciating burning sensation that it comes with which can last anywhere from 30 minutes to an hour, depending on treatment.

The spray also has a very strong choking effect on the lungs. This is like if you have ever cooked a pan of oil and then thrown chopped chili on, it causes a smoke which makes you cough. Again, times one hundred and you get the idea. This uncontrollable coughing lasts for about five minutes.

In summary, using OC spray on someone will cause:

This is why you should always adhere to all safety procedures when using the spray and make sure you fully understand the power it has when using it. In some countries it is a graded weapon specifically because of the debilitating effect it has, so please keep that in mind.

There is a common story out there that using water does not work. This is completely true. Water will not help lessen the effects of OC spray. Depending on the type of spray, other urban remedies such as milk does not work to fix the eye problem either.

The steps to treat OC spray are:

First, it is important to check with a product and your local laws as to whether you are allowed to carry OC spray. For most states and countries, if you are over 18, purchasing OC spray is legal. At the bottom of this article, I have included a list of US, European and Australian states and countries that have restrictions on carrying OC sprays for self-defense purposes.

Of the most widely used brands, SABRE is at the top of providers. They provide a large majority of law enforcement and military personnel with safety and non-lethal weapons and have large campaigns driven towards public self-defense awareness.

One product of theirs that I am very happy to promote is their pink case, police strength, red pepper spray. They launched this item to support the National Breast Cancer Foundation with proceeds going towards the Foundation and to raise breast cancer awareness.

For such a quality product at a cheap price, I really like the initiative that SABRE has undertaken here. As for the product itself, it works really well. It runs on a maximum strength formula to

ensure it does not fail for the user when they need it the most. It also has:

Another top selling Amazon OC spray and also a product from SABRE is their 3 in 1 pepper spray. This one comes with 35 bursts, unlike their breast cancer awareness OC spray and instead of coming with a keychain, is instead secured by a clip so that you can keep it more secured on a belt, pocket or in a backpack or purse. This unit also has a spray reach of 10-feet.

The reason why they call this spray a 3 in 1 formula is due to its combination spray of:

This UV marking dye mentioned is a way for police to identify people who may have washed OC spray off. The dye is revealed under UV light to show someone who may have been in a protest or may have attacked the firer of the OC spray. This is especially prominent in sexual assault attempts.

An alternative to the sprays and with a further shooting distance is SABRE’s Red Pepper Gel which shoots a gel rather than a spray. This is designed as a more safe way of using OC spray as there is no risk of a blowback of spray affecting the firer and will only affect the person that the gel lands on. The benefit to using the gel is that is has a further distance of up to five and-a-half meters so that a firer can remain at a safer distance from someone when using it.

The Mace brand has been a trusted personal defense spray provider since 1970 and has a range of high-quality personal security items. One of their most popular and innovative items is their pepper gun which provides one of the most accurate sprays in the market.
Mace have refined this product to suit female carriers who want to be able to carry a safe product, that will, if needed, keep them safe. They have done so by developing the gun into what it is today. The features of the gun are:

These are a great item for anyone preferring to use something that is controlled like a gun but as a non-lethal suppressant.

This is a new product available online but is already making an immense amount of sales for what it is. Basically, it is an airsoft gun that fires OC spray rounds.

For people seeking a non-lethal alternative to home defense, this is the ideal item. Let’s take a closer look as to the specifics of this kit. Each kit comes with:

So why do I think this is the perfect home protection device? This handgun can shoot OC spray pellets at up to 150 feet, or 45 meters. The rounds use military OC spray which breaks on impact in a spray cloud affecting the attacker with the initial shock of the shot and then the following OC spray side-effects. Unlike a normal firearm, this isn’t a gunpowder weapon so there’s no bang or recoil when it is fired. It is simply a high-powered paintball OC spray gun.

This is definitely a self-defense item that will no doubt become more widely used with law enforcement as well as the public as a method of suppressing, delaying and immobilizing criminals and attackers.

Another wide use of OC spray is by campers, hikers, and hunters as a deterrent against bear attacks. Much like in the event of an attacking aggressor, the spray gets used to deter an attacking bear. A very trusted brand for bear OC spray is the Frontiersman Bear Spray which works with a 2% strength of capsaicinoids and is EPA approved. The Frontiersman spray is made by SABRE, who made the personal defense items I mentioned previously.

The spray shoots at a 9m safe distance and also delivers a rapid spray fog in the area of firing to ensure an added blanket of OC protection against a charging bear. The spray is widely recommended by national park services and is effective against black, brown and polar bears. If you are a regular hiker or camper in areas where bears regularly roam then you should be adding this to your pack before you step out the door.

As mentioned above, because of the debilitating effects of OC spray, even though it is a vegetable you can buy in the supermarket, it has some legal obligations with it.

As of 2016, OC spray can be used and carried in all US States. However, there are some restrictions in certain states:

California: Container has no more than 2.5 ounces or spray

Michigan: have “reasonable use” of spray with no more than 10% oleoresin. Must be over 18

New York: Must be over 18. Must be less than 0.67% capsaicin. Must be purchased from pharmacy or firearm retailer. Must keep proof of purchase

New Jersey: Non-felons over 18 can possess.

Washington: Must be over 18. Can carry at 14-years-old and up with guardian’s consent

Wisconsin: OC Spray must have less than 10% concentration. Weight range of oleoresin is 15-60grams. Must have a safety feature, not camouflaged.

Belgium: possession is illegal for anyone other than police officers

Denmark: possession is illegal for anyone other than police officers

Germany: Sprays must be labeled “animal-defense spray”. Justified use against humans as self-defense is allowed.

Hungary: possession is illegal for anyone other than police officers

Ireland: possession is illegal for anyone other than police officers

Italy: anyone over 16 without a criminal record can possess

Netherlands: possession is illegal for anyone other than police officers

Norway: possession is illegal for anyone other than police officers

Sweden: possession is illegal for anyone other than police officers

Turkey: possession is illegal for anyone other than police officers

UK: possession is illegal for anyone other than police officers

New South Wales: must be an authorized person

South Australia: must have lawful excuse

Western Australia: must have “reasonable excuse” for self-defense item

Queensland: may use as a personal alarm device

Make sure you check with any local regulations on the possession of OC spray and pepper spray and ensure you familiarise yourself with all safety procedures when getting your spray.

Keeping Your Home Dry In Floods With Self-Rising Flood Walls