Get Lost: The 6 Best States to Live Off The Grid

Living off the grid is a dream for many homesteaders and preppers in the United States, but not all states are the ideal choice. My husband and I researched the best states to live off the grid as we created our prepping plan.

Making the decision to go off the grid is HUGE, and not something that should be undertaken without careful considerations. You have to think about water sources, climate, transportation, and more. First, and most importantly, you have to decide where to what to move or if your current state is a good choice. Some state laws make living off the grid impossible or illegal – seriously!

When my husband and I made our list, we considered a few factors.

So, let’s look at the 6 best states to live off the grid. 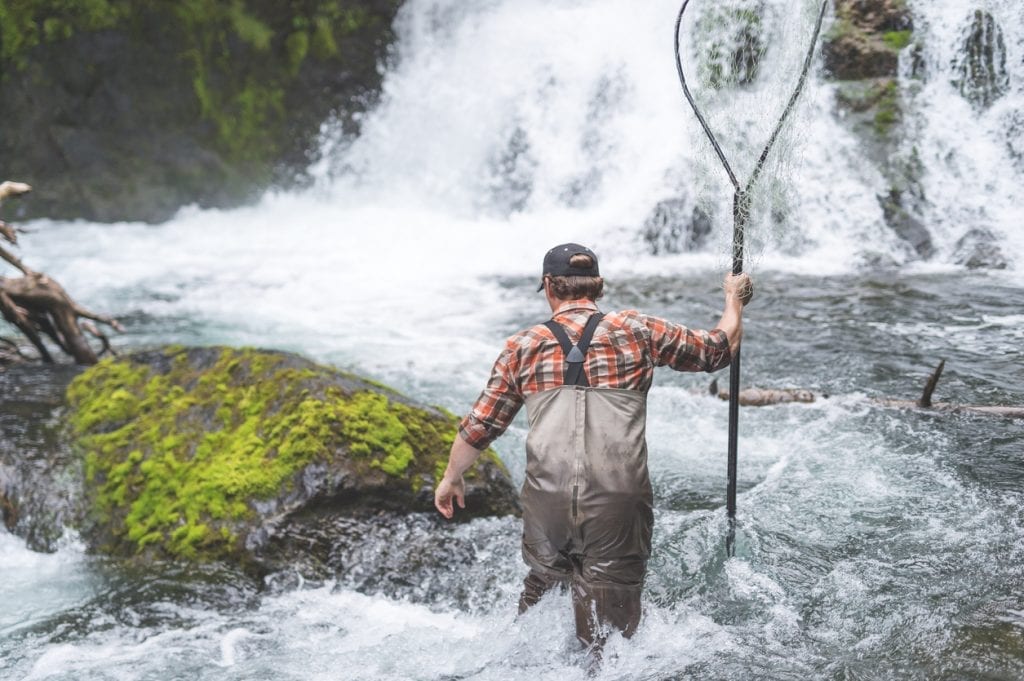 Alaska is truly the last frontier of the United States, with a vast majority of the state uninhabited. The state is filled with natural beauty and isolation. I can’t lie; all of those Alaskan frontier shows sure make it seem like an appealing choice, if it wasn’t for the temperatures.

Water: Alaska receives an average snowfall of 74 inches and 16.57 inches of precipitation. So, as you can imagine, water isn’t an issue for Alaskan residents.

Temperature: Everyone knows Alaska is cold; that’s not revolutionary! If you’re used to mild weather, it may not be the best choice. In some northern areas of the state, temperatures can reach -65 degrees F. Weather is one of the reasons we pushed Alaska further down on our list, but you might be okay with cold weather!

Cost of Living:  Taxes always should be a consideration when considering a move. Alaska has one of the lowest taxes in the United States. It doesn’t have a sales tax, income tax, inheritance tax, or estate taxes. Only 25 municipalities have a property tax. People love Alaska for this reason!

Otherwise, Alaska can be pricey because it’s expensive to import things from the continental US. So, you might find gathering supplies and such costly.

Laws: Alaska’s laws are designed for off-the-gridders and homesteaders. You won’t find laws against gardening or farm animals, so long as you can provide housing for them and fenced pastures. Also, there are no restrictions on gun ownership! Homeschooling laws aren’t strict either, another appealing factor. 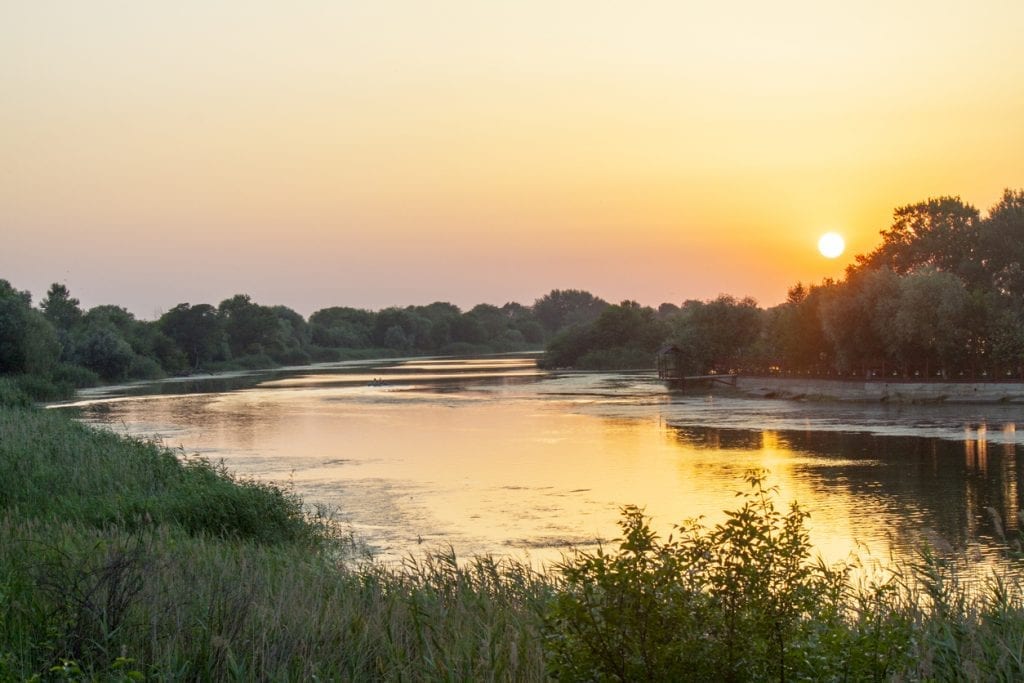 Missouri is friendly to off-the-grid livers. No zoning codes or building codes make creating a home easy, but you will need to have a safe well and septic system. Otherwise, the state leaves you to your own choices.

Water: The state receives, on average, 43 inches of rain and 25 inches of snow each year. You don’t have to worry about any rainwater harvesting laws; it’s legal in Missouri! However, summers do tend to be humid and hot, so you will need to plan accordingly.

Weather: Missouri is in the middle when it comes to weather. It’s not as warm as some other states, but it’s definitely not as cold as Alaska. The average temperature is around 50 degrees F. Winter tend to be mild!

Cost of Living: For the most part, Missouri does have low taxation. It does have a higher cost of living compared to other states, but that’s not due to the taxes. When I researched Missouri as an option, the cost of living wasn’t nearly as high as choices like Alaska, but not as low as places like Tennessee, so I call it a middle of the road choice.

Laws: Overall, Missouri offers relaxed laws. It has hardly any regulations when it comes to homeschooling. Gun laws are relaxed, but you do need a permit to carry a handgun. The laws surrounding farm animals are easy. Some rules do surround septic systems and wells, but rural areas have no building or zoning codes. 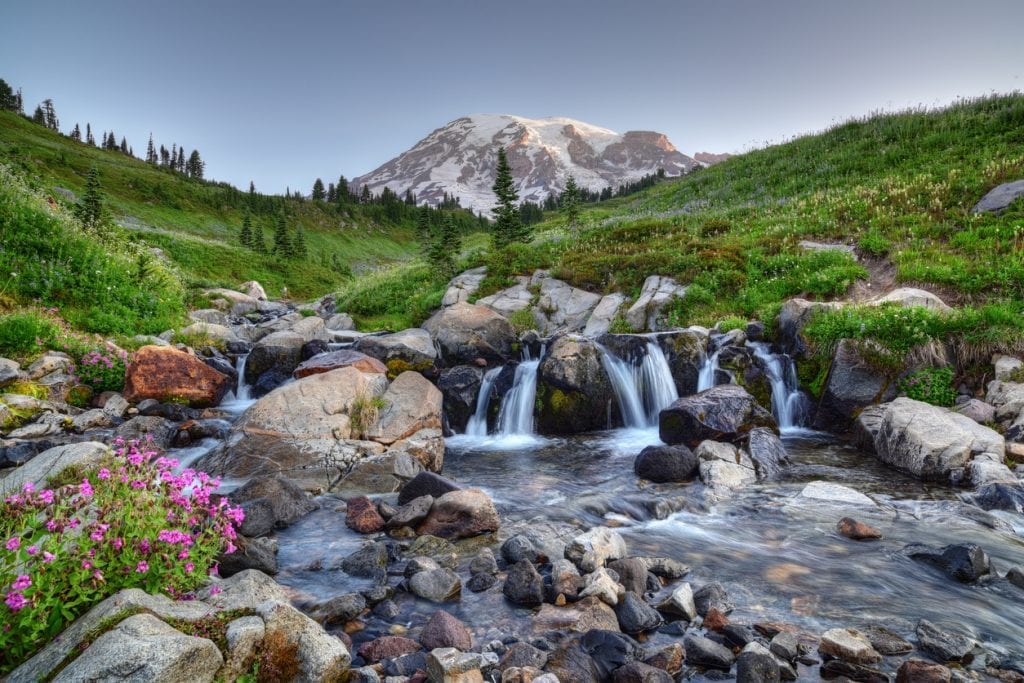 Washington State is perfect for someone who wants a lush, forest-filled state. With decent temperatures and relaxed agricultural laws, Washington state is appealing, especially if you want to stick to the west side of the US. A growing amount of freelancers are flocking to Washington, especially those who like tiny homes!

Water: Most people know Washington state receives an abundance of rain – an average of 39 inches. That’s one of the reasons why the forests tend to be so lush and dense. Washington typically doesn’t receive much snowfall.

Weather: Washington’s summer temperatures average around 80 degrees F, and the winters hover around 45 degrees F. That’s pretty mild – not too hot, not too cold. It’s great for people who don’t like extreme temperatures in either direction, like me, if you can deal with the frequent rain! The state averages 147 days of rain!

Cost of Living: A downside to this state is that the cost of living tends to be higher than average, especially the closer you get to the cities. Rural areas are cheaper, but the overall cost of living is higher than the national average.

Laws: One downside is that Washington has some strict laws about HOW you construct your home. However, the bright sides are that Washington encourages rainwater collection, has lawful raw milk sales, and you can have multiple types of livestock.

You’re allowed to legally let your farm animals graze all year. Northern and eastern residents might find that they’ll need to supplement anyway because of the levels of snow. Gun laws are relaxed, but you do need a permit to carry a handgun. 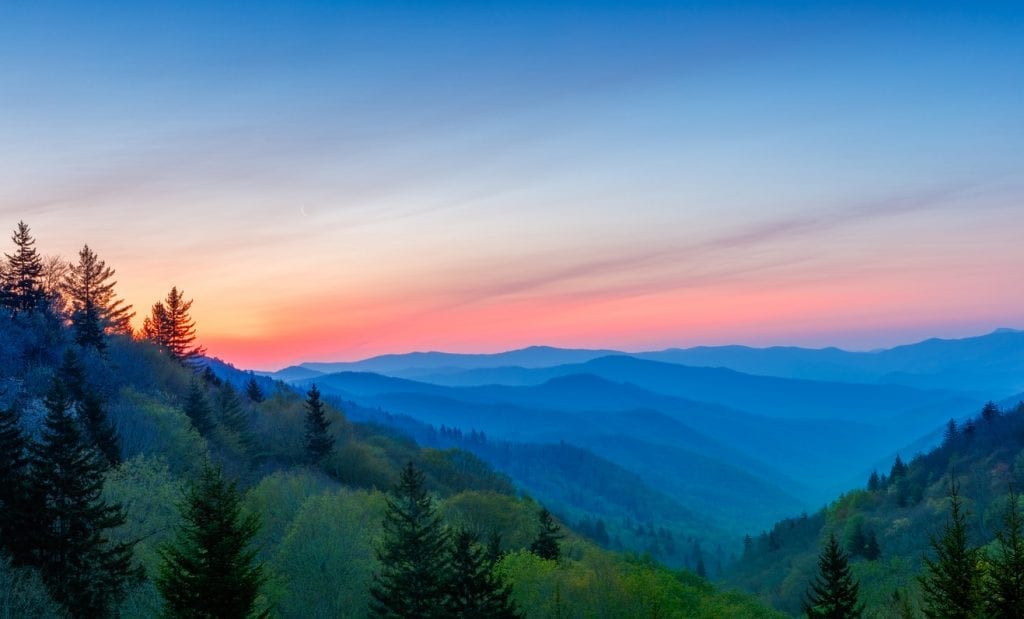 People consider Tennessee one of the freest states in the US with great laws and necessary rainfall to survive. I consider Tennessee an ideal state for off-the-grid living, especially if you want to stick more to the east side of the US. This state tops the list for our family!

Water: Tennessee is considered the 5th wettest state, so it receives ample rainfall, around 53 inches a year! There are no laws that regulate rainwater harvesting, so you can install a water catching system for your water needs.

Weather: Some people, such as myself, love the four distinct seasons, making Tennessee an appealing choice. July is HOT, reaching around 90 degrees F, and January has an average of 27 degrees F. Due to high moisture levels, Tennessee is humid, which some people dislike. If you’re living me, humidity means you might want an AC!

Laws: No regulations exist when it comes to gardening and farm animals. You’re allowed to have your farm animals graze all-year round. That helps decrease the costs of going off-grid. Lately, the state has noticed a trend of people using cob, straw-bale, and earth-bag constructions for their homes. No laws prohibit it!

Surprisingly, for being a free state, Tennessee, has medium regulations when it comes to homeschooling. It does require notification and evaluation of the student progress. Raw milk is only legal in a herd or cow share; you can’t sell to the public. 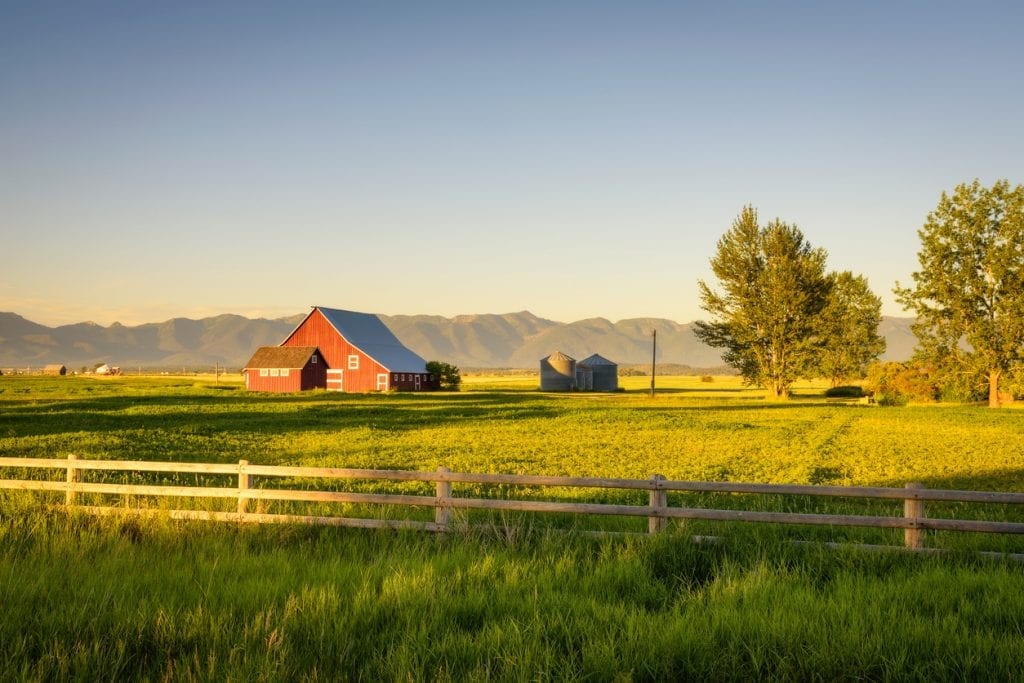 Montana is beautiful with wide-open spaces and sunrises that will set your heart on fire. If beauty and ruggedness are on your must-have list, Montana is a great choice. Plus, it has an abundance of natural resources that make it an ideal state for someone who desires a self-sufficient lifestyle.

Water: The state receives around 38 inches of snow each year, but otherwise, it’s a dry state except for the rainy season in spring. Some areas can receive up to 100 inches of snow!  Precipitation levels are around 11.12 inches on average. Luckily, rainwater harvesting is legal in Montana despite its dry climate.

Weather: The weather in Montana varies greatly depending on where in the state you live. In general, Montana doesn’t get too hot, unless it has a random heatwave. It’s dry, and winters can be harsh. Most of the state is covered in snow for the entire duration of winter.

You do want to consider the fact that Montana has a shorter growing season. It does have awesome grasslands and prairies for livestock. I suggest you have a greenhouse to extend your growing season, and you’ll want plans to supplement your livestocks’ feed.

Cost of Living: Compared to other states, Montana does have a higher cost of living. Property prices and taxes are high! However, you CAN get waterfront properties for a decent amount in Montana, and water sources are crucial for living off the grid.

Laws: If you’re interested in a state with relaxed gun laws, Montana will please you. It’s an open-carry state and a conceal carry state. While the farm animal laws are relaxed, you will need to provide supplemental feed because the growing season is pretty short here. The building code laws are relaxed as well, so you don’t have to jump through hoops.

Unfortunately, the sale of raw milk is illegal. In fact, their laws make it tricky to even drink your own raw milk. You do need a permit to keep chickens, but there are no maximums and the permits are cheap. 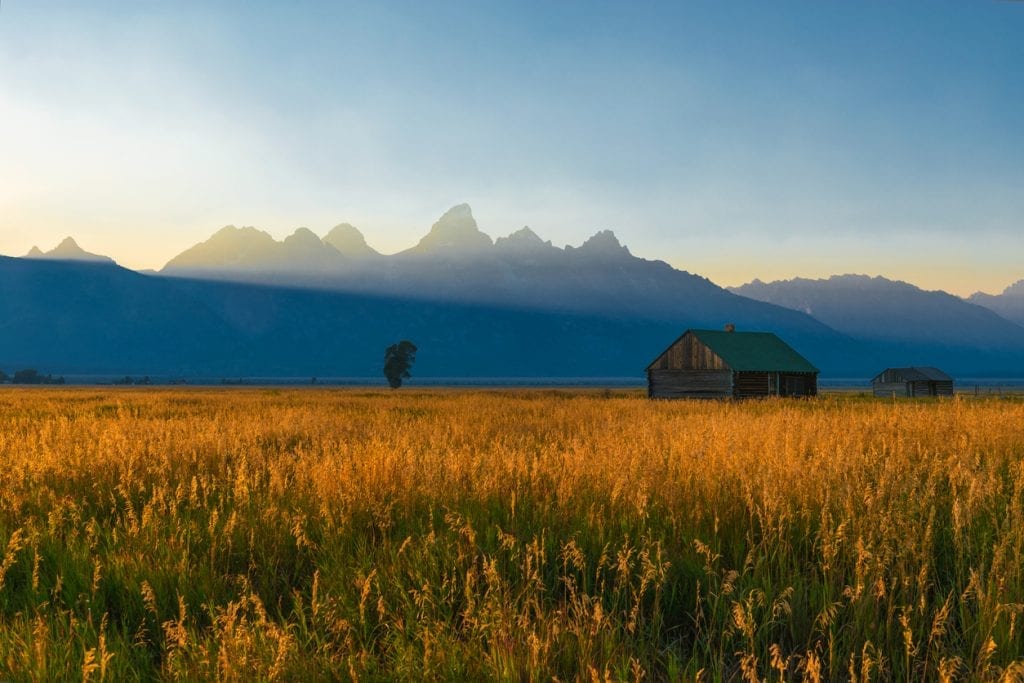 If you’re looking for isolation, Wyoming is the state for you, especially if you don’t want to go all the way to Alaska. Wyoming offers residents an abundance of natural resources and beauty that everyone can appreciate.

Water: Wyoming does have a bit of a water problem. The yearly precipitation is 15.66 inches, and snowfall varies. Due to the lower precipitation rates, some areas do have rainwater harvesting restrictions. You’ll need to check the area that you are considering removing to see if there are local laws. Some areas need to see that you’re putting the water to proper use.

Weather: Unlike the other options on this list, Wyoming is a semi-arid state with some desert conditions in different areas. It has a long winter season with a short summer. Winter temperatures dip down to 15 degrees F, and summer temperatures can reach up to 82 degrees F.

Cost of Living: Another negative to Wyoming is that the cost of living is higher than the national average. However, it has no income tax, and the sales tax is only 4%. Property taxes are higher, but it seems to work out with the other taxes.

Laws: Wyoming is just as relaxed as other options on this list. Education laws are relaxed, which is great for homeschoolers. Gun laws are also are lax! You’ll find that Wyoming has very relaxed construction laws in rural areas.

There are no gardening laws, but raw milk sale is only legal with a herd or cow share program. You can’t sell directly to the public.

Almost every state in the union has advantages and disadvantages for off-the-grid living. You might be surprised, if you thoroughly investigate, that your current state could be a viable option. Make sure you consider our top four factors when picking the best states to live off the grid.

1 thought on “Get Lost: The 6 Best States to Live Off The Grid”